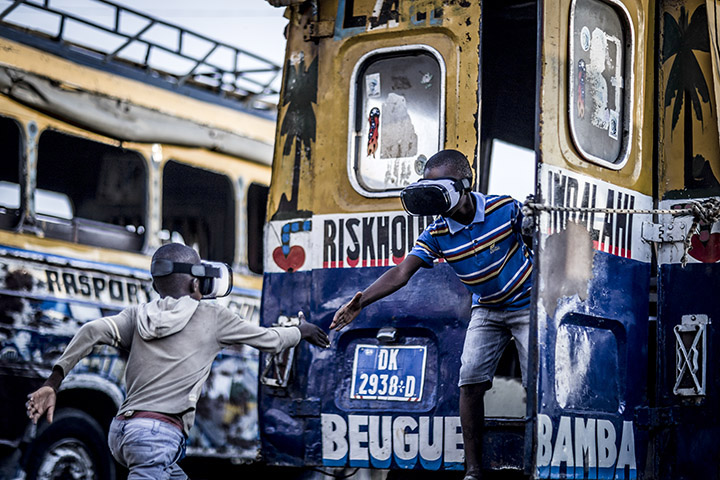 As an exercise, this article will be an analysis of the above image for the formative elements that give that image meaning.

This picture, at a glance, depicts a few things: two busses, one in the foreground, the other in the background, a boy running, and a second boy reaching out to take his hand and pull him aboard. Upon closer inspection, the viewer notices that the boys are wearing virtual reality headsets. Humans direct their gaze in the direction of other humans, and so it follows that, even despite the boys’ eyes being covered by goggles, a cursory glance at this image would have the viewer trace the eye line of the two kids to their hands, which are outstretched. This point, where their hands are about to meet, becomes the focal point of the image.

The viewer is guided into this focal point and made to experience a snapshot in time wherein they expect both boys to lock hands and pull the other up onto what viewers might assume is a moving bus. This sense of movement is created through the use of shapes. The bus in the background appears at an angle to the horizon, evoking instability. As Molly Bang explains in her book, Picture This: How Pictures Work, “Diagonal shapes are dynamic because they imply motion or tension” (Bang 46). For all the viewer truly knows, both buses could be perfectly stationary. However, this tilt lends the scene motion. It is accentuated by the boy on the ground’s stance. He is in a running position, which might imply that he is running to catch up to a bus already in motion. The direction his stance and outstretched arm takes is upwards and to the right, flowing into the body position of the boy already on the bus, creating yet another diagonal. This time, this is done in the foreground and stands in contrast with the bottom-right-facing diagonal in the background. In addition, the running boy is positioned outside the frame of the bus in the foreground, and therefore is able to be readily juxtaposed with the angled bus in the background, thereby creating further tension in the left side of the image. Combining the boy’s stance and position with the angle of the second bus further accentuates this feeling of motion.

As the viewer continues appraising the image, they are led to assume that both boys make it safely onto the bus through the use of shape and color. On the right side of the image, the square shape created by the bus in the foreground is seen parallel to the horizon. Of this positioning, Bang writes, “we humans are most stable when we are horizontal because we can’t fall down” (Bang 42). This horizontal shape is seen as stable, in contrast to the tension of the diagonal shapes on the left. The running boy’s stance and direction leads the viewer into that square shape, signifying a move towards stability in the image. Color is used to great effect to further this feeling of safety. Blue colors evoke a sense of calm and trust. Both the bottom half of the bus and the shirt color of the boy on the bus is blue. While being led into the stable square of the bus, the viewer is also being led into this blue. Continuing to follow the trajectory of the outstretched hands, the top half of the bus is a gold color. Orange and yellow colors feel inviting and hopeful. After the blue, the viewer experiences the gold, allowing the image to pervade hopefulness. The viewer subconsciously feels at ease, and is likely to think that the running boy will make it safely onto the bus.

Lighting is yet another element that guides the viewer through the scene. The light source is implied to be located off the image, in the direction of the door the kid in the blue shirt is holding open, due to the reflection on the metal. Since this kid is behind the door, he is in the light’s shadow, alongside the rest of the visible bus in the foreground. Meanwhile, the kid that is running is bathed in that light, along with the bus in the background. This produces a spotlighting effect that draws the viewer’s attention to the left side of the image and to the running kid. From here, they continue to direct their gaze from light to shadow, moving from left to right as the lighting combines with the scene’s other visual elements to move them through the scene.